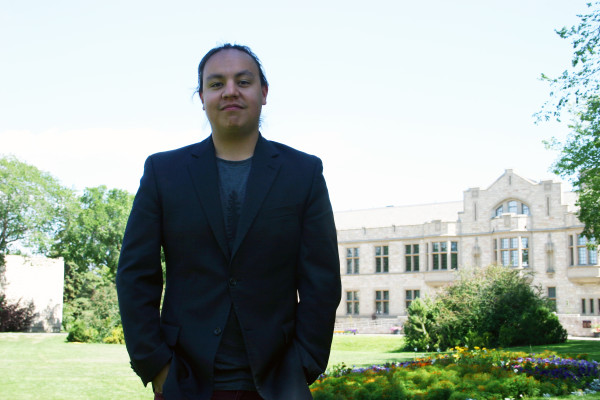 Max was elected president of the University of Saskatchewan Student Union (USSU) in May 2013, and will serve their 27,000 students for the next year.

It takes courage and bravery to be an advocate and a leader, your willingness to be in services to others is another great example of the stellar leadership your generation has to offer.

Max has a clear vision for his role as a leader that comes from knowing who he is and where he comes. He attributes this to his family because they secured his strong connection to the Cree culture by sharing their stories and values.

Those Cree values are ingrained in who he is as a person as well as his leadership style. In the Cree culture, taking a leadership role is done at the invitation and encouragement of the community. It is uncommon for leaders within the Cree culture to volunteer themselves into a leadership position like the dominant or mainstream culture we see in North America and other cultures.

Making the decision to run for the USSU presidency was based upon being asked by his peers over a period of time. He felt he needed to be asked to consider taking it on and that running for office had to be the desire of those who he would serve.

Where it All Began

As a teenager, Max was already an effective and impactful leader. His exuberant personality and inspired leadership, generated enthusiasm, excitement, and trust among his peers.  Max began to foster his leadership skills by joining CISV Canada, a peace education organization for children and youth. As adult in the organization I was quickly impressed by him.

His experiences with CISV played a huge part in his leadership development. It was through his participation in their local, National and International programs that he first began to understand his own identity as both a member of the Cree Nation and as a Cree Leader.

“I learned so much about the world around me and myself and my values, and what I think is right; it gave me the ability to see things happening around the world in a more personal way – it gave me a better understanding how broad the world is.”

Most importantly these early intercultural experiences made him more comfortable with his own identity as a young man of color who was growing up in a predominantly white culture.

Learning from his peers across the country and globe gave him a greater appreciation for diversity and cultural understanding.

He said, “It gave me some values based experiences that gave me early insight into the anti racism and oppression training I got later on as I got more involved with activism and advocacy in my community.”

He has also had some amazing mentors in his life from his community advocacy work that has helped him shape his understanding of leadership.

An Inclusive Approach to Leadership

Max has a powerful and inclusive approach to leadership. When I asked him about his vision for his role as USSU President and the challenges he faced, the overarching theme was conversation.

He places a high value on every voice and ensuring that everyone’s voice is included. A key influence of the Cree culture on his leadership is his strong belief and practice of inclusion. Before he was even elected, Max started to have “meaningful and crucial conversations” with students and administration.

He believes it is essential if the university is going to grow. He found that the students on his campus are, despite popular belief, engaged and want to be involved. These conversations have led to a lot of listening and great learning experiences for him. He understands that his fellow students want to be involved, but that there may be more effective ways to engage them.

Now that he is president he has started to have more informal conversations with people, listening for their needs and the ways in which they want to be engaged. He believes that knowing more about what students want is vital to his success as USSU president.

Max is clear that his role as a leader is to be the voice for the people, and of the people. Today he is working for all the students on his campus, but also believes he can build a bridge for First Nation and non-First Nation students. He wants to start of series of real dialogues, facilitating the opportunity for everyone to increase their cultural competence.

He said, “I’m the president for every student, but I can’t ignore who I am and where I come from.”

As leaders, knowing who you are and what you believe is fundamental. Our leadership is informed by all of our experiences, and culture plays such a critical role defining who we are and who we want to be. To effectively lead and inspire others to follow requires the confidence that can only come from having a strong sense of self.

I asked Max, what insight or advice he had for your generation? This is what he said:

It’s interesting being a First Nations person living in the city & going to university. I watch the way my generation is interacting with technology, facebook, twitter, instagram, there’s a constant connection there for us that hasn’t been there for any other generation.

Then I go home to the reserve and it’s so different. It’s slower and quieter. Its talking and storytelling. There is still a technological connection for sure, but it’s tapered. There’s an understanding that technology can’t do everything.

That would be the biggest piece of advice for my generation. There is more to the world then technology; we need to do better to balance technology with people who are different from us to learn and grow. Hear the stories of others and let them shape who you are.