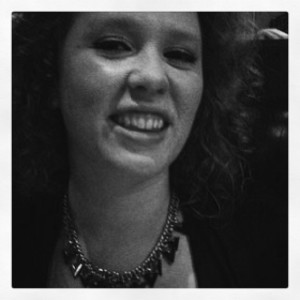 At only 14 years old, Meaghan had the courage to stand by her convictions. At that young age she was able to demonstrate a willingness to act on her beliefs, even at the at risk of alienating her peers and being subjected to the the consequences. I was proud to know her then, and even more now.

Taking an unpopular stance has become a place she has grown increasingly comfortable in.

You see,  Meaghan proudly identifies as a “strident feminist”.  An especially courageous stance at a time when being called a feminist is more of an insult than a compliment and feminism has seen a decline in its popularity among Boomers and Gen Xers.

Meaghan admits that when she was younger “feminism looked so radical and angry from the outside.”

But while a studying Public Affairs and Policy Management at Carleton University in Ottawa she performed in the Vagina Monoglogues and it ignited her curiosity to know more about feminism. For her, “feminism ultimately means having the right as a woman to do with you want with your body and person. Not so intense or scary right?”

Where does her courage come from? Meaghan says “having a very strong female presence in my life, in the form of my mother.” She said, “[her mother] has been a strong supportive presence for me my whole life, and she has never discouraged me from trying or applying myself to anything. I think that inherent relationship and its closeness, allowed me to let other strong female presences (such as yourself T :)) into my life and influence me to be stronger.”

Now Meaghan has become the strong female presence in the life of so many around her.  I am inspired by her ability to establish her own values and beliefs and her willingness to stand behind them. She inspires me to take a stand for my own beliefs.

Maybe you’re not a feminist, but do you have courage and conviction?

Whatever it is you believe, be reminded that it is important that your beliefs inform your behavior. It doesn’t mean you have to be an activist and scream from the rooftops, but people should be able to recognize your beliefs not by your words, but by your actions.

Today Meaghan is pursuing a graduate certificate in Project Management at Royal Roads University in Victoria, British Columbia. This is an opportunity for her to build her professional profile and leadership skills so she can effectively pursue a career in community development.

I asked Meaghan a few questions about her beliefs and what she thinks it means for Millennials.

Question 1: What would you like to see change the most?

I think changing the ways and intentions we have with communication can be very powerful. Communication affects on a mass scale (ie. media,) or even on a low scale (ie. interpersonal relationships).

Both are important, and both shaped by behaviours and practices in societies. I think learning conflict resolution training as a teen, meant that I understood how to communicate effectively in all situations, and I think this has really helped me throughout my life with friends and family, jobs and bosses and profs, meeting new people, especially considering what a “hot-tempered redhead” I can be haha!

Learning how to be honest, and ask for what you want, or convey how you really feel, or just getting to the point can save a lot of confusion, frustration, problems, even heartache and break! I think if we all communicated with intention, honesty, and openness, a lot more, we would see some much less confused, frustrated and unhappy people!

Question 2: What would you want women and men your age to know and or do about women’s issues today?

I would say one of the biggest things is lifting the notions people that might be unfamiliar with feminism have about feminism as a label.

Just be open to the idea as an ideology, and embrace what you want to embrace from it, and know there is an entire global community of people here to support you. For young men, I would say huzzah for the allies! Men can be feminists too, and in fact they have such an important role to play within the patriarchy. One of my favourite quotes on the subject is:

“Men who want to be feminists do not need to be given a space in feminism. They need to take the space they have in society & make it feminist.”  —Kelley Temple, National Union of Students UK Women’s Officer

Question 3: What insight or advice do you have for your generation?

For young women I say don’t feel pressure any which way to conform to anything. Period. The same is actually true for men. But I always feel especially compelled to tell young women – be a scholar in any area, be an underwater welder, be a comedian, be a stay at home mum, but ultimately do what feels good for you, and what makes you happy! I still don’t know what that looks like for me, but I try and make sure my goals, and actions are in harmony with this theory.

Further to this for the “millennials” – things seem super daunting for us right now as a generation (believe me I fret!) And I also don’t believe that “30 is the new 20” and your 20s are a throwaway decade, so be young and have fun while you are young!

If you have ambition and goals to achieve you do need to work towards them now, as well as later, to achieve them. But don’t let the “daunting” nature of today’s job climate feel like a dark cloud. First of all, there are too many cool things to look at on the internet (uh hello, cat memes), let alone actually outside in the real world, to spend any time worrying about your future. But try also to find a balance of having fun and exciting experiences while you are young as well, in the sense that we are as least attached to anything now in our lives (for the most part) than we will be in our lives.

If at some point you hate your job and life, and want to jaunt down to S. America for a little while, then do that! If you want to go to law school, then just plan and organize how that is going to work, and tackle it bit by bit – and then find ways to have fun in the day to day mundane activities in the meantime! Having a sense of humour about stressful situations has kept me sane more times than I can count!

But just make sure that everything you’re doing is true to who you are, and what you want for your life.