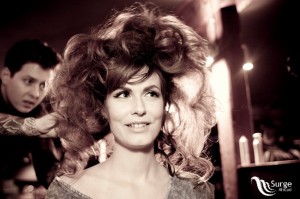 Dave Arter…You inspire me! Dave walks the talk and does it with passion and intention. We met when he was a younger up and coming hairstylist in Victoria, British Columbia. He made an outstanding first impression, not only in the quality of his work, but with his professional attitude and ambition.

At the age of 20, Dave became a hairstylist, and has been focused on his craft and finding a voice for himself in a very competitive business. He has been committed to developing his skills and actively engaging in ongoing education and training, traveling to New York, Montreal, Toronto, Vancouver, and Seattle to do so. Each time I’d see him he would tell me of an upcoming training he planned to attend, and sure enough the next time I‘d see him, he would use the new techniques he had learned to do my hair.

Always hungry for more, Dave mentioned he wanted to be on a new reality TV show for hairstylist back in 2008. And well wouldn’t you know it, by my next hair cut, he had already returned from filming Superstar Hair Challenge. Dave was a young and provocative member of the 2008 cast, and continually impressed the judges with his skills. And despite their “over confident” characterization of him, Dave’s humility is one of his most impressive qualities.

In 2009, Dave became a father to a beautiful daughter, Adora Valentina Arter, and successfully balances his career with his commitment to being the best father he can be. On my last visit, Dave announced he would be opening his own hair studio to better serve his clientele, and in November 2012 Born Hair Studio opened its doors.

I asked Dave for any advice he had for his generation and he said:

No one owes you anything. Work hard, eat healthy and exercise.

Best advice for young hairstylist. You know the saying “dance like no one is watching”? Well I would say “always cut hair like someone is always watching. It will keep you always progressing

Favorite Quote – Our prime purpose in this life is to help others. And if you can’t help them, at least don’t hurt them.

He is still the only hairdresser I can find who is skilled with naturally curly hair. Dave is so talented that after three years of being relocated in the US, I still rely on my visits to Canada to see Dave for haircut. Follow Dave at http://www.facebook.com/BornHairStudio or visit his studio at #17-655 Forts Street in Victoria B.C or book an appointment now at 778-977-0080