Are You Afraid? Use your fear to get into the arena 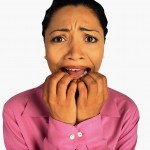 Fear can be a powerful and paralyzing emotion. If you allow it, fear can be an obstacle to setting goals, fulfilling your dreams, and being adventurous. And yet, fear can also be a catalyst for action. I admit, I am afraid a lot of the time; I am afraid of failure, success, taking risks, trying new things, being vulnerable…and the list goes on. The trick with fear is to not let it be a reason you don’t do something, but to let it be the reason you do something you think you can’t do.

Life can be one big “boogie monster” so we have to acknowledge our fear and understand that it comes with the territory, then use it as a catalyst for doing the impossible.  Brene Brown, researcher and author, introduced me to this great quote from Theodore Roosevelt:

It is not the critic who counts; not the man who points out how the strong man stumbles, or where the doer of deeds could have done them better. The credit belongs to the man who is actually in the arena, whose face is marred by dust and sweat and blood; who strives valiantly; who errs, who comes short again and again, because there is no effort without error and shortcoming; but who does actually strive to do the deeds; who knows great enthusiasms, the great devotions; who spends himself in a worthy cause; who at the best knows in the end the triumph of high achievement, and who at the worst, if he fails, at least fails while daring greatly, so that his place shall never be with those cold and timid souls who neither know victory nor defeat.

So choose to get into the arena, and while it is scary and risky, live life daring greatly, then not daring at all.